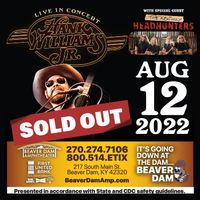 Hank Williams Jr.'s extremely impressive resume has spawned 70 million albums sold worldwide, six PLATINUM albums, 20 GOLD albums, 13 No. 1 albums, and 10 No. 1 singles. Marking 52 years since his first album in 1964, Hank Jr. released IT’S ABOUT TIME (Nash Icon Records) in 2016. In addition to the history-making “Are You Ready for the Country,” the project included new tunes such as “Dress Like an Icon,” “Just Call Me Hank,” “It’s About Time,” and “The Party’s On” as well as re-recorded versions of classics “Mental Revenge” and “Born to Boogie” with Brantley Gilbert, Justin Moore and Brad Paisley on guitar. The album debuted at No. 2 on Top Country Albums, the highest he had reached on the chart since the release of LONE WOLF in 1990. IT’S ABOUT TIME marked Hank's 37th album in his five-decade career.    Since then, the country music icon has continued to add accolades to an already extremely impressive resume. Hank Jr. has undoubtedly staked his place in music history and garnered industry recognition as an ACM Entertainer of the Year, CMA Entertainer of the Year, and BMI Icon, in addition to notching a GRAMMY win and an induction into the Nashville Songwriters Hall of Fame. The crown jewel on his running list of career accomplishments came in late 2021, as he proudly carried on the family tradition with a pandemic-delayed induction to Nashville’s Country Music Hall of Fame. As a touring artist, Hank Jr. was a pioneer in bringing arena rock production values to country music. Today, generation after generation continues to show up to see one of the most dynamic live performers ever to take the stage.

The Kentucky Headhunters, declared “the great American rock ‘n’ roll band” by Billboard magazine, began their professional journey in 1968 when brothers Fred and Richard Young and cousins Greg Martin and Anthony Kenney formed the Southern blues-rock band Itchy Brother. The band morphed into The Kentucky Headhunters in 1986. Their first album, 1989’s Pickin’ On Nashville, was released by Mercury Records and surprised the world, becoming a bonafide hit, selling over two million copies. The album won a Grammy Award, three Country Music Awards, an American Music Award, and an Academy Of Country Music Award. It spawned four consecutive Top 40 Country hits. Currently, the band is made up of Richard Young, Fred Young, Greg Martin, and Doug Phelps.

During the height of the pandemic, the Kentucky Headhunters performed Kentucky’s first Drive-In concert in Beaver Dam on June 13, 2020. The event sold out in less than an hour and raised substantial funds for local food banks. 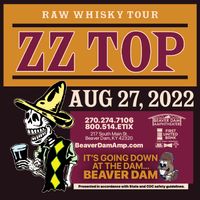 ZZ TOP’s music is always instantly recognizable, eminently powerful, profoundly soulful and 100% Texas American in derivation. The band’s support for the blues is unwavering both as interpreters of the music and preservers of its legacy. It was ZZ TOP that celebrated “founding father” Muddy Waters by turning a piece of scrap timber than had fallen from his sharecropper’s shack into a beautiful guitar, dubbed the “Muddywood.” This totem was sent on tour as a fundraising focus for The Delta Blues Museum in Clarksdale, Mississippi, site of Robert Johnson’s famed “Crossroads” encounter with the devil. ZZ TOP’s support and link to the blues remains as rock solid as the music they continue to play. They have sold millions of records over the course of their career, have been officially designated as Heroes of The State of Texas, have been referenced in countless cartoons and sitcoms and are true rock icons but, against all odds, they’re really just doing what they’ve always done. They’re real and they’re surreal and they’re ZZ TOP. 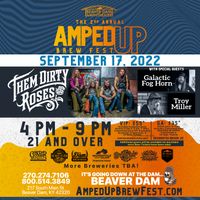 The 2nd Annual AmpedUP Brew Fest will take place on Saturday, September 17 at Beaver Dam Amphitheater. The event is limited to guests age 21 & over and will feature a concert with THEM DIRTY ROSES, Galactic Foghorn, and Troy Miller. Fresh food offerings hot off the grill, concessions, as well a wide variety of tasty craft beers from numerous regional breweries will also be available. The event will take place from 4 pm until 9 pm.

21 and over only. Ticket prices increase by $10 on the day of the show (if available). Plus minimal processing fees 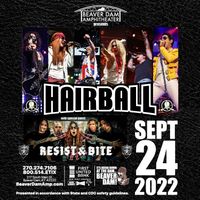 A Password PreSale for tickets begins Wednesday, March 23 at 9 am CST and lasts until Thursday, March 24 at 11:59 pm CST. To receive the password, sign up for the email newsletter at: BeaverDamAmp.com. Tickets go on sale to the general public on Friday, March 25, at 9 am CST.

Advance tickets range from $15.50 for Lawn GA to $50.50 per person for Lower Arena Reserved Tables.* Reserved Tables are only available as a 4-person table ticket. Prices increase by $10 per person on the day of the show if tickets are still available.