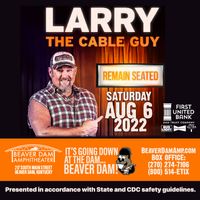 Multi-Platinum recording artist, Grammy nominee, Billboard award winner, and one of the top comedians in the country, LARRY THE CABLE GUY, is coming to the DAM on Saturday, August 6, 2022 as part of the First United Bank & Trust 2022 Season at Beaver Dam Amphitheater.

Tickets go on sale to the general public on Wednesday, December 22, at 9am CST.

A portion of proceeds from ticket sales will be donated to a relief fund for victims of the devastating December 10, 2021 tornado in western Kentucky. 100% of funds donated will go directly to assist those impacted.

LARRY THE CABLE GUY recently released a new special, Remain Seated, which is currently streaming on Netflix. The album of the same name was released on April 10, 2020 through Sirius XM, Spotify, Amazon Music, Apple Music, Pandora, Sound Cloud, and more. Most recently, he appeared on the hit FOX show “The Masked Singer,” and showed off his vocal talents as the character, “Baby.”

Larry has a comedy special with Jeff Foxworthy, which is also available on Netflix. Additionally, he launched his own comedy channel, “Jeff and Larry’s Comedy Roundup,” on SIRIUS XM. The channel is a partnership with SIRIUS XM and Jeff Foxworthy. It showcases the best in great American comedy. You’ll hear hilarious material from this dynamic duo as well as comedy from some of their personal favorite comedians.

Larry starred in the movie Jingle all the Way 2 for FOX Home Entertainment. The movie was released on DVD December 2, 2014 and also aired on the USA network. Other film credits include A Madea Christmas. Tooth Fairy 2 (2012), Witless Protection (2008), Delta Farce (2007) and his first feature Larry the Cable Guy: Health Inspector (2006). When Health Inspector was released on DVD in August, 2006 it sold more than one million copies in the first week of release.

Larry is the voice of the beloved Mater in the Golden Globe winning animated feature film Cars (2006) and Cars 2 (2011) from Disney/Pixar. Both movies opened number one at the box office and have a combined worldwide gross of more than one billion dollars. Larry returned as the voice of Mater for Cars 3, which came out in theaters in 2017. He will reprise the role of Mater for the new Disney+ series, “Cars on the Road,” which will be released sometime next year.

Larry The Cable Guy has his own line of merchandise and continues to sell out theaters and arenas across the United States.

Please go to: BeaverDamAmp.com for additional information including seating chart, venue policies, and FAQ. Make sure to sign up for the email newsletter to receive the password for the presale.

Beaver Dam Amphitheater is an outdoor concert venue in Beaver Dam, Kentucky. Currently, there are no vaccination, negative test, or mask requirements for concerts and events at Beaver Dam Amphitheater. However, in the interest of safety for all, the venue reserves the right to institute safety protocols in accordance with any local / state / CDC mandate or per artist requirement.