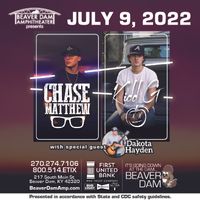 From Music City’s broadway scene to the Tennessee Hills you’ve most likely heard the name Chase Matthew. Chase, currently Co-Signed by Ryan Upchurch, has garnered an astounding 70 Million streams in a short 4 months with his project “County Line.” With a rising position on billboard charts for 18 weeks and being placed on the biggest country playlists and stations (Hot Country, Todays Country, New Boots, The Highway XM) Chase has remained humble in his faith. This God-fearing artist is known for never turning down an opportunity to meet a fan, his friendly smile, and remaining grateful for every twist life throws his way. Currently, Chase is preparing his new album “Born For This” dropping in February 2022 which will include him hitting the road and playing venues across the nation. With a rare gift for turning his hometown experiences into natural melodies, Kidd G has found tremendous success by staying true to his roots. As a kid growing up in small-town Georgia, he first started creating his own songs at the age of 15, and soon arrived at a gritty but melodic sound equally inspired by classic country and hip-hop. On the heels of his chart-climbing breakthrough single “Dirt Road”—an October 2020 release whose video surpassed 5 million YouTube views in little over a month and now has 13M views to date—Kidd G has recently shared his debut EP; the powerfully heartfelt Teenage Dream. Now having surpassed 1.5M monthly Spotify listeners, his tracks have seen radio play from KIXX Country Radio in Australia and reached new peaks on highly coveted country playlists including Amazon Music’s ‘Country Heat’ (peaked at #2), and Spotify’s ‘Hot Country’ (peaked at #10). Kidd G is now back in the studio and eager to share all new music that will continue to showcase his unique raw talent.